A LIFE LESS ORDINARY: Éamon Kelly was pure Kerry. He loved the soil of the county, its people, its places, its history and its faces and he dug deep into the well of culture and character that is the Kingdom during the course of his long and distinguished career as one of Ireland’s great actors and a seacchai that had no match – then or since. In a series chronicling the stories of remarkable Kerry people who have live remarkable lives, KillarneyToday.com reflects on the life and times of the remarkable Glenflesk man whose talent on stage was simply unrivalled and never to be forgotten.

I’D know you boiled in porridge.

Classic turns of phrase, such as that, earned the late great actor and seanchai Éamon Kelly a special place in the hearts of a whole generation of people at home and abroad and his wonderful vocabulary and use of everyday language proved, time and again, how much of a master storyteller the Glenflesk man was.

Éamon attended night classes at Killarney Technical School and from there, in 1938, he won a scholarship to the Bolton Street College of Technology where he was trained as a woodwork instructor.

After qualifying, he was first appointed to the Listowel area which turned out to be the most important appointment of his career because it was there he met his future wife, Maura O’Sullivan.

On the stage he made a name for himself in 1964 in Hilton Edwards’ production of Philadelphia Here I Come which toured Broadway and for which he was nominated for a Tony Award after winning the New York Critics Award for best supporting actor.

Returning from the USA, Eamon joined the Abbey and went on to tour in England, Russia and the USA. He was named Kerry Person of the Year in 1983.

Éamon taught in various Kerry parishes from 1941, travelling by bicycle from home to school and back again.

Born in Glenflesk, Killarney, it was while he was based in Listowel that he became firm friends with Dr Bryan McMahon and a young playwright by the name of John B Keane.

Before John B became famous with Sive, Éamon had moved to Dublin to join the Radio Éireann Repertory Company where he spent 12 years before moving to The Gaiety.

He is remembered best as a seanchai who had the power to craft pictures with words through his stories on radio, in particular, but he also had a captivating presence on the stage.

Primarily an actor, he became a storyteller more or less by accident. Asked to do a party piece at a Radio Éireann function on one occasion, he told a yarn and the station’s then head of entertainment programmes, Micheál Ó hAodha, asked him to do some more stories.

Following Éamon’s death in October 2001, at the age of 87, John B Keane recalled a story once relayed to him by the late great seanchai.

“He asked did you hear about the school teacher from North Kerry or thereabouts. He gave these boys a test, a composition to write on a day’s hunting and, when he was going through them, he came across one which was very short and very sweet.

“It said: “A days hunting, by Mick O’Shea. Myself and my father, and two other dogs went hunting yesterday. The end.”

John B remarked: “With stories like that he could have you in stitches. He could lift you, he had the knack of lifting you.”

“I don’t think I ever saw him with a sad face,” John B recalled.

“He could do wonderful things with his face but, essentially, he was a soul of kindness and compassion and when he spoke to people, he spoke to them as equals and they regarded him as one of their own. They were very, very proud of him,” said the Listowel author.

John B continued: “He was a man I greatly admired and any time he played in one of my plays I was overjoyed.

“The Kerry Slide was a traditional dance peculiar to Kerry and that was the way he walked, he brought things to life”.

John B added: “He would meet you in Listowel and he could look at you in the distance and, finally, there would be a great handshake and thereafter great banter.

“Generally a number of people would gather round because he was basically a pure entertainer and he was a wonderful actor.

“He was one of the most under-rated actors ever to play on the boards of the National Theatre. Of course he was nominated in New York for a Tony award which most people said he should have won.”

John B went on: “Éamon wasn’t ambitious. His role was to take the audience in his hand and mould them into something he could handle. He could entertain majestically.

“Éamon always made the point that anybody who wanted to talk to him was welcome,” said John B.

The master storyteller touched generations of Kerry men, women and children with his stories.

Éamon Kelly was born in 1914 and grew up in Sliabh Luachra. He left school at the age of 14 and became a carpenter, like his father and grandfather before him.

But in the early 1940s he trained as a vocational teacher and started as a woodwork teacher in parishes around Listowel. It was during this time that people remember him zooming from place to place on his bicycle.

Listowel is also where he met his wife, Maura, in the local drama group. She was a native of the town and a budding actress. The two eventually left to join the RTÉ Repertory Company and Eamon went on to become one of the most famous voices in the golden era of Irish radio, renowned for the shows he broadcast from above the GPO.

Éamon really won the nation’s heart when he brought his stories around the country to village halls and local pubs, drawing huge crowds.

He had a long running relationship with the Abbey Theatre where he joined forces with director Michael Colgan to put on a one-man show every June for seven years. The production first took to the stage in 1975 and was called In my father’s time.

Kerry County Council hosted a civic reception for Eamon in November 1999 and, at that time, he was referred to as a national treasure and an excellent ambassador, not only for Kerry but for the whole country. A bursary in his memory is presented very year by the Killarney Arts Committee and Killarney Municipal District Council.

Eamon and Maura had two sons, Eoin and Brian, and a daughter Sinead. 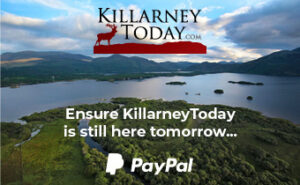 Support KillarneyToday.com. Help us to keep you in the news