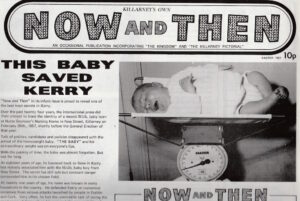 So screamed the banner headline that certainly caught the eye of an unsuspecting Killarney public 40 years ago this week.

It accompanied a monochrome snapshot of a big baby sitting on a weighing scales in a nursing home in Killarney on 26 February 1957 and the public was left to wonder as to the identity of the new arrival.

The baby boy tipped the scales at an incredible fifteen and three quarters pounds and it arrived in the world, with  healthy bawl, at Nurse Seymore’s Home on New Street, Killarney.

24 years after his arrival into the world, the baby in question was still making the news, so much so that he feature on the front page of the first ever edition of Now and Then which hit the news stands 40 years ago this week.

The story accompanying the brilliant picture revealed that the name of the baby in question was known in every household in Kerry 21 years later as he defended his county from numerous attacks, usually perpetrated by people from Cork and Dublin. 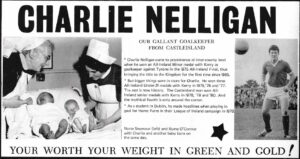 The story revealed: “Very often, he had the unenviable task of saving the good name of Kerry all on his own and the responsibility of making split-second decisions on behalf of the county was left entirely in his hands”.

It added: “To uphold the honour of Kerry, he made dozens of public appearances all over Ireland and appeared live on TV before tens of thousands of people. Still, nobody knew he was the fifteen and three quarters pound baby boy from Nurse Seymore’s Nursing Home in New Street”.

Readers of that first edition of Now and Then had to rush to page 10 of the newspaper to learn the identity of the celebrity baby who was, of course, the great Charlie Nelligan, the legendary Kerry goalkeeper who won seven All-Ireland medals, nine Munster titles, three National League medals and two All-Star awards during the course of his glittering inter-county career.