But a bunch of players that came through the ranks together had loftier ambitions and they were determined to move to a higher level and open the door for other opportunities.

Pat O’Shea told Newstalk’s Off The Ball roadshow, at the Dr Crokes clubhouse on Wednesday night, that when he was growing up, he and his team-mates idolised the more successful clubs of that time such as Austin Stacks, Nemo Rangers and other teams they wanted to emulate at some stage in their playing careers.

Dr Crokes then set about building proper structures and they went on to become one of the most successful and competitive clubs in the country.

“Coaching programmes were put in place, people were brought through the right way and we looked after people as much as we could and, eventually, our aspirations grew,” he said.

O’Shea, 53, who also won an All-Ireland club title as a player in 1992, said Dr Crokes were lucky to be able to call on “some of the greatest footballers of all time”.

He told the Off The Ball audience at the Lewis Road clubhouse that, in the past, the summer activity in the busy tourist town of Killarney had regularly raised questions about the commitment of players to football and getting the balance right was always “a bit of a worry”.

There had been a perception from the 1960s right up to the early 1980s that the players were “enjoying Killarney too much” and they were pushed aside, he said.

“That has changed, to be fair, and from our point of view, we are just thrilled that we are going through a golden period in the club. Obviously, this doesn’t last and we understand that but you have to enjoy the period that you have and we have enjoyed it – it’s been great,” he said.

One of the most successful and talented coaches of the modern era, O’Shea managed the Kerry minor team for two years before leading the seniors to All-Ireland glory in 2007 and he moulded the Dr Crokes teams he managed into a stylish, attacking sides that won several county championships, provincial titles, club championships and county league titles.

Cautious with the media and always anxious to shun the limelight, preferring to let his teams do the talking on the field, O’Shea’s appearance as a guest on Off The Ball offered the public a rare glimpse into his thoughts on the game and the issues that surround it.

Comparing his All-Ireland club win as a player in 1992 to the role of manager in 2017, the charismatic GAA personality said lining out as a player in the final was a dream come true because you never think you are going to get there.

“The amount of hard work that goes into getting a team and an individual prepared to play at the very highest level and to fulfill every ambition they have ever had in their life is just unbelievable. It’s difficult to explain,” he said.

O’Shea stressed that despite public perception that his club has a vast number of players to call on, Killarney is a small town with three clubs and a number of others in very close proximity so securing players is a very competitive market.

He revealed that for the 1992 All-Ireland Club final Crokes had just 21 players togged out, two of them were injured and the sub goalie was playing at wing back. The group was so small that after winning the Munster Club title the year before, they had to go looking for players to join the panel.

O’Shea said winning the All-Ireland again in 2017 was a great achievement and it was particularly wonderful that Colm Cooper won a club championship on top of everything he  had achieved.

“It was very much the closing of the book or the icing on the cake in a lot of respects,” he said.

“The club is everything. You can have all the glory externally but the only people that will really matter in your life are the people really close to you. Through the bad days and the good days they are the people that are going to be around you all the time,” Pat O’Shea said.

“You will always have people patting you on the back when you win a big game but you figure out your real friends when things are not going the way you would like them to go”. 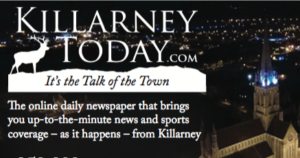