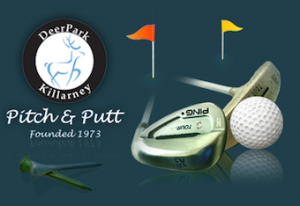 KERRY will have a total of 14 players participating, in three grades, in the Munster Matchplay pitch and putt finals at the Lakeside Pitch and Putt Club, Templemore, Co Tipperary at the weekend.

In the seniors Damien Fleming, John McGrath and Jason O’Brien from the Deerpark Club in Killarney and Tralee’s Tony Blake fly the flag.

Tralee’s John Fitzgerald, Jason Cregan and Alan Hobbert along with Castleisland’s Aidan O’Connor do battle in the Intermediate grade.

In the Junior grade all six qualifiers are from the Tralee club and they are Pa Byrne, Roger Guthrie, David Hobbert, Paul O’Shea, Aidan O’Sullivan and Tim Scannell.

On Saturday the first round and last 16 games take place with winners progressing to the quarter-finals on Sunday morning.

Last week the qualifiers for the National Matchplay Finals also took place in Castleisland and it was a one-two-three for the Killarney Deerpark Club with Conor McCarthy, John McGrath and Jason O’Brien all winning through to the finals which take place in Seapoint Pitch and Putt Club, Termonfeckin, Co Louth over the June bank holiday.