The players did the business in some style on the day but, off the field of play, Gneeveguilla GAA Club showed real style as well thanks to a very moving and fitting gesture in Tullamore, Co Offaly on Saturday.

Seanie O’Leary’s finely tuned charges registered an emphatic 5-8 to 1-12 victory over Denn of Cavan to book their place in the All-Ireland Junior Football Championship final in Croke Park but, before the throw-in, the club had some other important business to take care of. 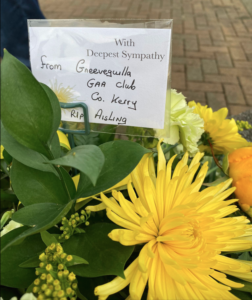 A number of dedicated Gneeveguilla club stalwarts, including chairman Stephen Crowley, took the time to place a floral wreath close at the Grand Canal Greenway, where 23-year-old schoolteacher Ashling Murphy lost her life in such tragic circumstances.

The Kerry premier champions were anxious to show solidarity with and support for Ashling’s family and friends and with the people of Tullamore and they said a silent prayer for the hugely talented young Tullamore woman whose life was cut short so tragically and so brutally.

Only Kilmeena of Mayo now stand between the spirited Kerry side in their quest for the All-Ireland title in Croke Park next weekend and the big game has become the talk of the county.