YET another Healy-Rae name will appear on the ballot paper in Kerry in next May’s local elections.

Jackie Healy-Rae Junior, son of TD Michael Healy-Rae, has confirmed that he will be a candidate in the Castleisland area and he will be hoping to join his first cousins, Johnny (Kenmare) and Maura (Killarney) on the new-look Kerry County Council.

Jackie is a 23-year-old parliamentary assistant who has been working alongside his father for almost five years.

Boundary Commission changes will see Kerry carved up into six separate constituencies and the Healy-Rae organisation is determined provide a full political service by gaining seats in at least three of the electoral areas.

“The Castleisland area, which includes areas in East Kerry, has been represented by a Healy-Rae since 1973. This is why we believe is extremely important to field a candidate in this area as not to do so would almost be like we were abandoning the people that we have represented for so long,” said Jackie Jnr’s father, Michael.

The new candidate, who is a former Rose of Tralee escort, remarked: “I have not been short of teachers when it comes to politics. The experience I have gained from my father in the last five years has been invaluable”.

He said his parents were reluctant to allow him to work full-time with his father since 2013 but he was determined to pursue a life in politics.

Meanwhile, at the Fianna Fail convention for the Dingle area, held in Milltown last night, outgoing councillor Michael D O’Shea and Breandan Fitzgerald were selected to content the election in the Dingle area. 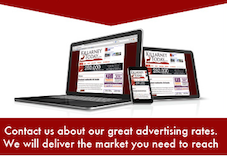 ← Numbers come up for the Gobnaits
Massive €1.2m boost for safety and security →