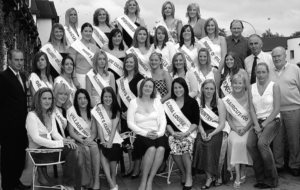 THURSDAY TURNBACK
A Snapshot from the Archives

IT’S a wonderful tradition that dates back almost half a century but, growing in statute with each passing year, the annual Lily of Killarney pageant is now bigger and better than it ever has been.

Introduced in 1974 as a key part of a Spa GAA Club carnival, the organising committee – spearheaded by the entrepreneurial Frank Moynihan – decided that the title of Jules Benedict’s famous opera would be a most appropriate name for the competition which was open to young ladies sponsored by local businesses.

The carnival was held in O’Donoghue’s Field on Park Road – where McDonald’s Restaurant and a number of housing estates now stand – and the inaugural winner 46 years ago was Eileen O’Connor from Dromlusk, Blackwater who was the first recipient of the coveted Healy-Cronin perpetual trophy.

Since then there have been lovely lilies crowned every year with the ladies’ committee of Spa GAA Club ensuring that nothing is left to chance when they event is being planned.

The format is simple but effective – over 30 contestants are nominated by businesses or community organisations, they are interviewed on stage at a gala celebration and the newly crowned Lily receives a glittering array of prizes and fulfills a number of roles in the community throughout the year, including being to the forefront of the St Patrick’s Day celebrations.

The pageant has taken on a more glamorous stamp in recent years with celebrity judges with national profiles engaged to conduct the interviews but the Lily of Killarney has never strayed far from its roots which are firmly embedded in the community and it’s all about a sense of place.

Shauna Goggin is the reigning Lily and her successor will be crowned and will take possession of the sash when the big event comes around again in the summer months.

© KillarneyToday.com is the 24/7 online news service provided by O’Mahony Media
Advertise for 2020 and ensure your message reaches 18,000 readers every day, over 300,000 viewers every month and over 23,000 followers on Facebook