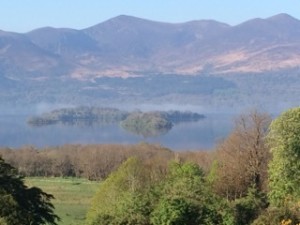 TERRIFIED tourists had a lucky escape when a touring boat on which they were travelling on the Lakes of Killarney earlier today became submerged.

A total of 12 people were on board a Gap of Dunloe bound boat when the incident occurred at approximately 11.15am.

The passengers were tossed into the water as the vessel became submerged and they clung to the boat until assistance arrived from other boatmen who were in the area at the time.

Nobody was injured but it is understood that some property and valuables, including bicycles, cameras and mobile phones, were lost.

A number of those who suffered losses in the incident have made statements to the Gardai.

The Department of the Marine and the National Parks and Wildlife Service are expected to conduct an investigation into the matter.