Grammy nominated global music sensation Celtic Woman is to return in 2022 with a super new show Postcards from Ireland – and the great news is it’s coming to town.

Following a four-month tour of North America in the spring and summer, the stage spectacular is coming home for three dates in the Gleneagle INEC Arena, Killarney on August 18,19 and 20.

This is a welcome return to Kerry for Celtic Woman, who filmed two videos for their Postcards from Ireland DVD/TV special last year with locations including Muckross Abbey and Inch beach.

Postcards from Ireland celebrates the rich musical and cultural heritage of the country, taking audiences on a remarkable and enlighting journey of story and song.

The audience can embrace an evening of angelic voices, breath-taking harmonies and instrumental virtuosity, transporting them from their seatd through the lush landscapes of Ireland.

With Irish dancers, bagpipers and an array of traditional Irish instruments, including the bodhrán, tin whistle and uilleann pipes, this dynamic and multi-talented group has captivated audiences all around the world.

They have brought appreciative audiences to their feet wherever they have performed and Celtic Woman received a rousing reception from Kerry audiences during previous performances at the Gleneagle INEC Arena.

Tickets for the Killarney shows, priced from €33.20, are on sale now and available from www.inec.ie or www.ticketmaster.ie. 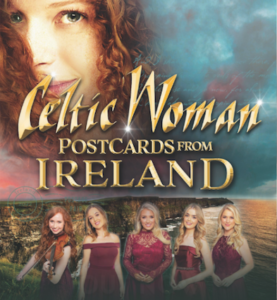