A Kerry TD has slated opponents of the traditions of Puck Fair and criticised the actions of those that demanded the King Puck goat be taken down from its 50ft stand in the town square during soaring temperatures.

Deputy Danny Healy-Rae said he accepted assurances from the festival committee that a veterinary surgeon was monitoring the wild mountain goat every hour and that his safety was treated as an absolute priority.

“If the goat was above on top of Carrauntoohil or below in the Black Valley would they be monitoring him every hour?,” he asked.

Deputy Healy-Rae, who attended the official opening of the festival on Wednesday night and visited against last night for an open air Declan Nerney concert, said he enjoyed himself thoroughly and it was great to see people meeting after the pandemic hardships of the past two years.

“I’m sad to see these animal rights activists, as they call themselves, interfering and interrupting this great event.

“These are the very same people that are against the greyhound coursing and against a lot of other things. They never seem to be for anything,” he told Radio Kerry.

“There’s a lot of animals and a lot of dogs and a lot of goats who would be in a bad way if they were depending on these so-called animal rights activists,” he maintained.

The Kerry TD said a great deal of work has gone into organising this year’s festival just like it had for Puck Fair events over the past 400 years. 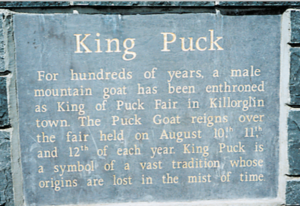 “The committee ensures that the goat is properly seen after, fed and watered, over the three days and that’s what they’ve done back over 400 years and the history shows that nothing adverse ever happened to the goats,” the Kerry politician stressed.

As reported on KillarneyToday.com yesterday, King Puck was taken down from the 50ft stand in the town square yesterday morning after a vet had expressed concerns about soaring temperatures but while it emerged, late last night, that the animal was hoisted back up to the stand and remained there overnight, it was taken back to a cooler, sheltered environment at ground level this morning.

In a statement issued yesterday, the festival committee said the goat was removed from the top of the stand due to “unprecedented spells of hot weather”.

The animal was placed in the shade with a constant supply of cold water and food and was receiving hourly check-ups.